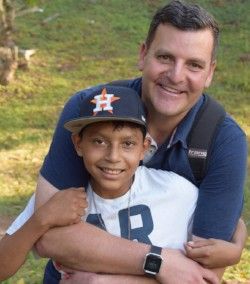 When I took this picture with Axel in a park near Tegucigalpa last week, there was something so familiar about it. Finally, it dawned on me and I went hunting for another picture, taken ten years earlier. When I placed them side-by-side, the parallels came painfully in to focus. Both are 13-year-old boys named Axel, and both had been in Micah just a couple of months when each picture was taken. Both have brought a lot of love into our lives, despite the jagged edges of their personalities created by violence, tragedy and loss.

One of these Axels sat next to me in the van on the way to church today, fidgeting with the radio dial and chatting about music, about soccer, about his bike. Though his first months at Micah have been terribly hard, he is a beautiful, funny kid who brings a smile to our hearts every day.

The Axel in the older pictures is just as much a part of my life as the one sitting next to me in the van, although he is no longer with us. Today is the third anniversary of his death, but his presence in my life is so palpable that he could just as easily be sitting next to me as is his young namesake. Both his life and his death changed me and changed Micah in a thousand different ways, and as I look at his picture, I realize that my life is fuller and so much richer because he is a part of it. 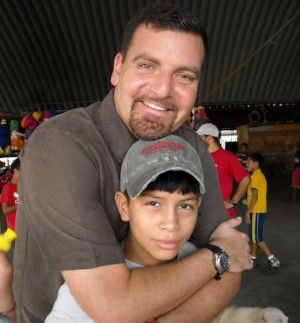 When I study these two pictures side-by-side, I realize that there is one other big difference, and that is in the man who is doing the hugging. The older picture shows a man who wanted to change the world using his own strength and his own smarts. When he had to say good-bye to Axel on March 18, 2015, all of that silliness went away forever. Now, he is a man who whose greatest tool for reaching these kids is a broken heart.

In his book, "Barking to the Choir," Father Greg Boyle says, "standing at the margins with the broken reminds us not of our own superiority but of our own brokenness." And that reminder is not a bad thing; I am convinced that reaching out to others with a broken heart brings us much closer to the Father-heart of God for lost and the wounded. This broken heart loves more deeply, shows more mercy, and sees the broken people of this world through the eyes of kinship and understanding rather than through the opinion that I, with all of my education and experience, have something to give to them.

That is the greatest gift that our first Axel gave to me. I wish he could be here so that I could explain that to him! I'm sure he'd just smile his goofy grin and playfully punch me on the shoulder as his response. Thankfully, I'll have an eternity to try to convince him how much he means to me. In the meantime, our new Axel is probably wondering why he's getting so many prolonged, extra-tight hugs on this hard day. Thankfully, miraculously, he's getting as good at giving those hugs as he is at receiving them. He doesn't realize that each tight squeeze I give him is doing double duty, showing love to him and also to the Axel in that other picture, now ten years old.