Hang Tough: a Timeline for Rescuing a Street Kid

June 19, 2015. Seven days after Jeff becomes a Micah boy. This has been one tough day.   Jeff is in the throes of major detox as his thirteen-year-old body fights his addiction to crack cocaine. You can see the internal anguish written all over his face as his body and mind scream for their addictive desires to be fulfilled.   This afternoon, he gets upset over an issue with a soccer ball and goes into full-scale meltdown mode.   He starts shouting obscenities at whoever happens to be in the living room at the time.   Noticing a knife in the kitchen where our cook Aida is preparing dinner, he runs in and grabs it. As he starts towards the front door of the house, I don’t really know if he is going after one of the other boys with the knife or if he intends to hurt himself. 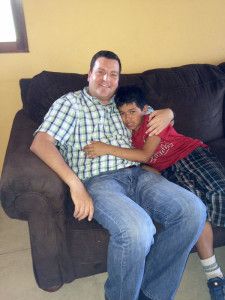 I wrestle the knife out of his hands. Jeff runs outside, finds some rocks from our gravel path and starts to throw them at the house. He runs back in several times, demanding that we open up the front gate for him so he can go back to the streets. Though he is normally mild-mannered, the look on his face now is pure rage.   Becca and I decide to carry on a normal, pleasant conversation with each other as he rages at us and around us, hoping to show him that his crisis will not become our crisis, and that everything will be ok.

Fifteen minutes go by and the fury begins to dissipate. He comes back into the house and sits down with us on the couch. In our same quiet tone that we have been using with each other, we reflect back to him how difficult it must be for him to overcome his addiction. We encourage him to keep fighting and we promise to fight with him.   He begins to weep and he leans over to me and hugs me tight.   “It’s just that I’ve never had a mom or dad before,” he says to us, as if he needs to find an excuse for being a street kid. He stays with us on the couch for quite a while, then gets up and goes to find the bike that we had bought for him a couple of days earlier.   He will spend the next hour riding around our property, sweating off those toxins that are still very much a part of his system.

The rage has passed and the crisis is over. For the time being.

June 11, 2015. One day before Jeff becomes a Micah boy. We are hosting a group from one of our main supporting churches in Houston this week and we are getting ready to take them out on the streets for a time of ministry with street kids. A few weeks prior, our street minister Stephen Kusmer had found a group of kids that he had never met before, and had been visiting them almost daily since. Our visiting team heads out in one of our vans, crosses through downtown Tegucigalpa, and inches its way through the streets of the crowded outdoor market.

Several blocks beyond the market, the van turns left into an alley that leads down towards the river that runs through Tegucigalpa. The group rolls to a stop in front of three makeshift lean-tos; shelters made of cardboard, plastic and whatever else the boys could scrounge from the dumpster. There are seven boys living in this alleyway, of which Jeff is the youngest. They huddle together for warmth at night, although the lean-tos are not sufficient to keep out the rains that are abundant this time of year. Though this alleyway is no place for a child to live, the boys have done their best to make it a home. They even have a little kitchen area where they can build a fire to warm coffee or cook some beans. 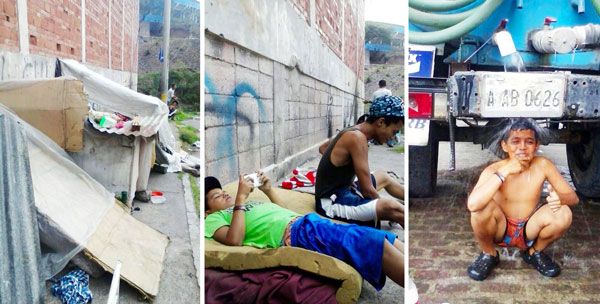 Even through the haze of drugs, the boys perk up when they see our van. Stephen has built up a level of trust with them that they have with no one else, and they greet our team members with hugs and smiles. Jeff is laying on a piece of sponge that used to be the interior of an old mattress, made soggy by the previous night’s rains.  He is happy to see Stephen and the group, and spends the time playing games on their phones. As the group prepares to leave after an hour or so, they invite Jeff to join them and the Micah boys the next day for an afternoon at the pool.

We didn’t know it then, but that invitation to a day of swimming would break down the last barriers of mistrust that Jeff would harbor. He would spend a happy day with us that following day, splashing around in the water and getting piggy-back rides from some group members. On the way back from the pool, he would spend a couple of hours at the Micah House—our surreptitious way of letting him check us out without the pressure of having to make an immediate decision to stay or go. A few days later, he would make the decision to join the Micah family! 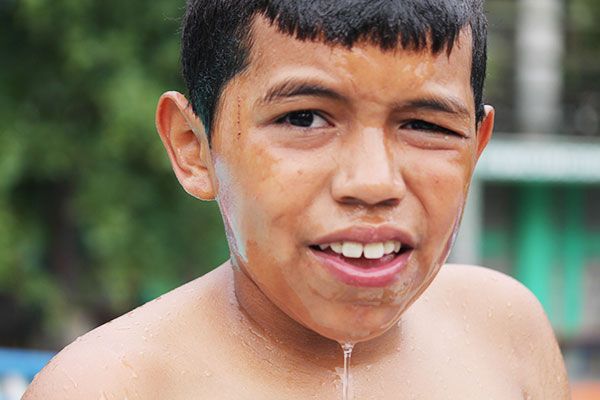 July 12, 2015. One month after Jeff becomes a Micah boy. When a kid who is dealing with an addiction enters the Micah House, we tend to celebrate his milestones big time. Tonight, we hold a special dinner to celebrate Jeff’s first month with us. He has chosen his favorite meal (fried chicken!) and we even have a couple of presents for him.

It has been a tough month, but the explosions of rage that Jeff has suffered have become slightly more subdued, and are happening with longer intervals between each one. We need to celebrate this month with him—to let him know that he is on the right path and shouldn’t give up now! We gather around the dining room tables as a family to enjoy the fried chicken. After the meal the other boys spend some time speaking words of encouragement to Jeff. Honestly, this has been a hard month for them as well. Even though many of them went through the same rough detox process, Jeff’s explosions have been difficult for them to deal with…they have brought temporary instability to a house that thrives on routine and unity. Many of the boys have tried to reach out to him in friendship but have been intimidated by the instability he shows.

The words they speak to him tonight, though, make me so, so proud of them. They encourage him to stand strong, they remind him that God is on his side, they relate to him their similar struggles with leaving the streets, and they assure him that they will stand with him in his battle between life and death. They are gentle and encouraging and forward-thinking. They are just teenage boys, but they speak with wisdom beyond their years. 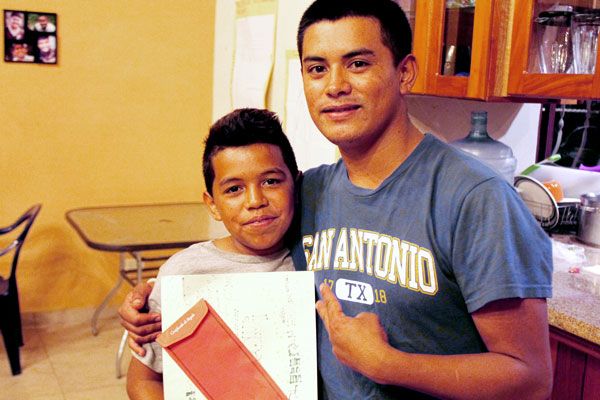 The one that gets to me though, is little Noé. His journey from the streets to the Micah House was the most difficult of any of our boys, even more than Jeff. He was so thoroughly addicted to the yellow glue that he could barely walk when he first entered the Micah House. A year and a half later, and we still see Noé’s recovery as a pure miracle. Though he is eleven, he has a childlike, innocent way about him that makes him seem much younger.

Noé raises his hand to speak to Jeff after several of the boys have already shared.   I nervously call on him, never quite knowing what words are going to come out of his mouth. Once he gets the floor he says, “I just want to say that I am glad that Jeff is my friend.” So simple, so innocent. But out of all the words spoken tonight, I know that those are the most meaningful to Jeff. He is so sure that he is worthless; that his past life disqualifies him from being loved and accepted.   Noé’s words are exactly what he needs to hear, and I utter a silent prayer of thanksgiving as I see Jeff’s face light up when hearing them.

Jeff’s one-month celebration ends with a hug fest, the Micah family coming together to physically remind this boy that he is one of us. I am hopeful for him; the road before him is a long one with many potholes in it, but tonight is a moment of healing and grace

August 12, 2015: Two months since Jeff joined the Micah family. This morning, I feel almost overwhelmed by a sense of thanksgiving. Jeff’s daily path continues to be difficult, but he has shown tremendous improvement from his first couple of weeks with us. I am so thankful to Micah’s missionaries and interns for standing with him. Sensing the intense spiritual battle, not only with Jeff but in the other boys as well, this group of faith-filled people had a week of fasting and praying a couple of weeks ago to beseech the Lord on behalf of Jeff and the other boys. I am honored and encouraged to be able to engage in this life and death battle with this group of humble warriors.I am also SO thankful for Micah 2.0. I truly do not think that Jeff would have made it had we still been living in the old Micah House in the city. There simply was not the space there to allow him to work out the rage and grief and pain during his time of detox. He would have ended up back on the streets. The setting out here at Micah 2.0 has been a vital part of his healing process. He has had the space to scream and yell and rage without being a danger to himself or others. And when he wears himself out and finally quiets down, he is enveloped by the peace of this place. 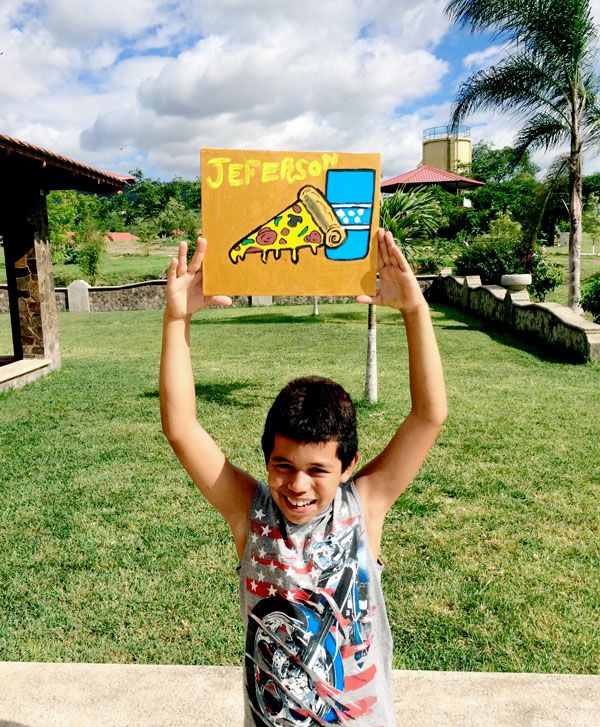 Finally, I am so thankful to each one of you, the extended Micah family around the world. We could not continue to rescue boys off the streets without your faithful financial support. It is a miracle that Jeff has been here for two months, and you are a part of that miracle every time you give to this ministry!

I don’t know what the next weeks and months hold for Jeff. Often, when I observe him unnoticed he looks sad, and I know that the trauma of his past life is never far from his thoughts. It reminds me to continue to recruit prayer warriors on his behalf. I truly believe that the Lord hears your prayers for children like Jeff and will act upon your prayers on his behalf. Pray for our staff, too! Lately, we have experienced everything from chikungunya (a terrible tropical virus) to scorpion stings as we strive to love these boys well. We could use the strength of your prayers!

Thank you for partnering with us in this journey. Thanks for encouraging us to hang tough with guys like Jeff, knowing that, in the Lord, our labor is not in vain!   We know that He will gain the victory in Jeff’s life!

Hang Tough: a Timeline for Rescuing a Street Kid