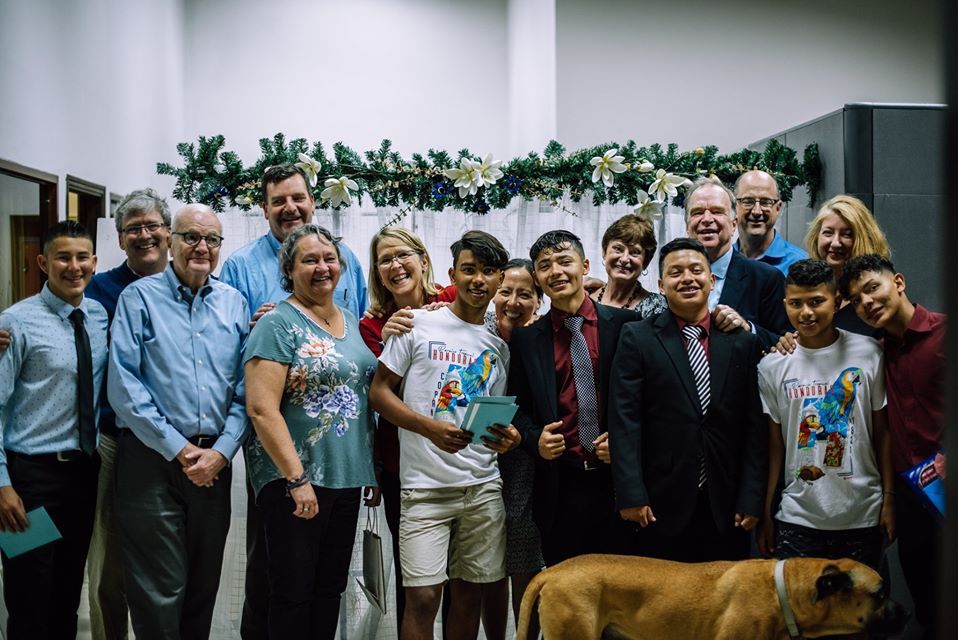 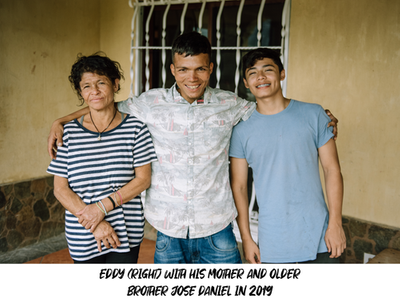 It’s family visitation day at the Micah Project. Eddy’s mom, drunk again, arrives at our gate. Her arm is wrapped in a filthy, homemade sling, a product of yet another street brawl in which she was the loser. Though she is in her early-50s, she looks twenty years older. Years of street life are memorialized in her face’s deep lines. Though the boys’ families know that they are not allowed to come drunk or high to the Tuesday visits, we often opt for a merciful bending of that rule; otherwise, kids like Eddy would never see their loved ones.

Eddy meets his mom at the Micah Project’s gate, takes her gently by her good arm, and leads her up our path to the Micah House. She is always welcome to join us at one of our large dining room tables, but in the six years that we have known her, she chooses to sit in a quiet section of Micah’s wrap-around porch. Filling a plate with chicken, beans, rice, and plantains, Eddy takes the food to her and sits down to chat while she eats. Although she is polite to all who pass by to greet her, she remains tucked into her corner. Street life has taught her to be invisible in plain sight. 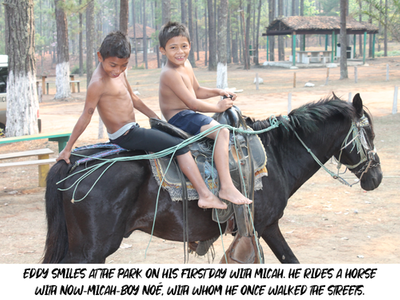 A bright, affectionate sixteen-year-old, Eddy is doubly-blessed with book smarts and emotional intelligence. He knows that his mom’s light-hearted chatter belies a world of daily degradation. After all, he was born on the streets and was inhaling yellow glue fumes by the time most kids are still using sippy cups. In some of the 2012 pictures we have of Eddy, he sits with a group of much older street kids in a trash-strewn alleyway in Tegucigalpa’s outdoor market. He was nine or ten at the time (he didn’t know his age when we asked) and the smallest boy in the group. Even then, however, there was something about him—the way he carried himself, his confidence in expressing himself—you could tell that he had amazing potential.

If you looked at Eddy’s story through human eyes, you might say that his entrance into the Micah Project happened accidentally. For several months, we had been building a relationship with him on the streets. One Saturday in April 2013, we picked him up in Tegucigalpa’s central plaza so that he could join the Micah boys in a park outside the city. 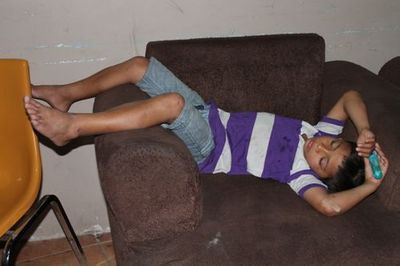 It was obvious that he had never been to a park before, because this tiny kid ran full-throttle all day: riding horses, playing soccer, and swimming until it was time to leave. When the sun began to recede over the mountains, we packed up our van. As soon as he got in, Eddy conked out. He slept all the way back to the Micah House, and when we pulled up we couldn’t rouse him. One of the boys carried him into the house and placed him in an armchair in our living room. He didn’t wake up for dinner; he didn’t wake up when the other boys went to bed; he didn’t wake up throughout the next morning.

Twenty hours after falling asleep, he finally opened his eyes. In perhaps his whole life that was his first night’s sleep in a safe place. He woke up to a different world. Eddy decided to stay that night, the next night, and the next—seven years later, the Micah Project is home.

Having never been to school, Eddy had some catching up to do, and he wasn’t about to miss a moment. Every day was a chance to discover something new. One Saturday, I took several boys to a mall for lunch. Afterwards, we walked over to an ATM so that I could get some cash for the week. When the machine started to whir and spit out the Lempira bills, Eddy’s eyes widened in surprise. “Whoa!” he exclaimed, loud enough for half the mall to hear.  He walked around and peered behind this magical money-making machine to see where the money had come from. After pondering a moment, he declared, “Aha! This must be the box where Michael hides all his money!” 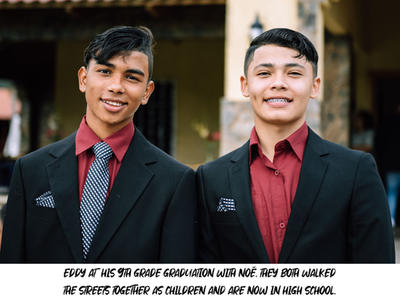 This February, Eddy started his junior year in high school. With each passing day, he looks less like the boyish waif who crashed on our armchair that first night and more like the adult he is becoming. On February 10, the start of the Honduran school year, he was especially excited because even though we homeschool our boys through most grades, they attend a Christian high school for their last two years. This requires our four seniors—Daniel, Selvin, Jafeth, and Jilder—and our three juniors—Noé, Junior and Eddy—to get up at 4:30 in the morning so that our van can fight its way through nightmarish traffic and get them to school before 7:00.

For Eddy, early morning wake-up is no problem. The inner strength that he has always shown has now deepened and matured. A few days ago, he was on the phone with one of our other boys, three years his senior, who is currently in a six-month rehab program for a recurring drug addiction. I heard Eddy building up the older boy and telling him that he was proud of him and that he knew that God would help him turn his life around.

That’s Eddy: quiet, confident and steady. Here at the Micah Project, we don’t usually engage in “what-ifs,” mostly because trying to keep thirty-plus teens moving forward every day doesn’t give us a lot of time to look backward. But sometimes I think, “What if Eddy hadn’t hopped in our van that day to go to the park with us? What if he had decided to stay downtown and huff yellow glue? What would have happened to this beautiful, blossoming spirit if he hadn’t found his way to the Micah Project?” 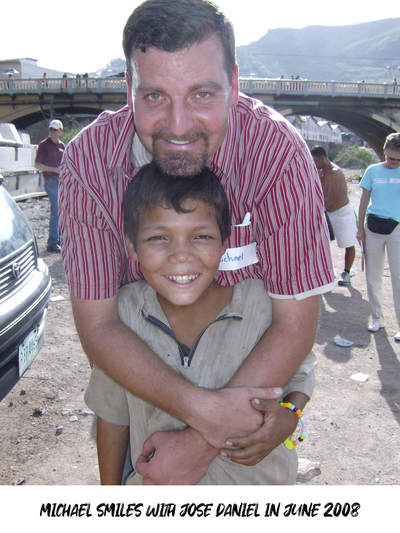 In Eddy’s case, we have a window into that sad, alternate universe. In 2007, we met Eddy’s older brother Jose Daniel. They both look very much alike, and have the same sweet spirit, despite the nine-year age difference. We tried everything to convince Jose Daniel to leave the streets and come to the Micah Project.  He visited, but we could never convince him to stay the night. Over the years, he morphed from street boy to street teen to street man; in his mid-twenties he began to show the same street-induced aging as his mother. In fact, he often joins his mom on family visitation day. Eddy sits with them and listens to their hard stories and encourages them in his quiet way. Smelling the glue fumes on Jose Daniel’s clothes and on his breath, we viscerally understand what Eddy’s life could have been.

In the last several years, Honduras has seen unthinkable social pressure: increased gang violence in urban neighborhoods, frequent street protests, mass immigration, unchecked corruption (including an election marked by fraud and won by a presidential candidate whose brother was convicted last year as a large-scale drug trafficker), and now, of course, a pandemic, which will stress one of the poorest healthcare systems in the hemisphere to its breaking point. 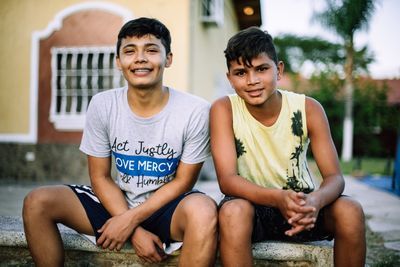 Through all of this, one truth is clear:  Honduras needs more men like Eddy. He has already been battle-tested and has learned to face adversity. Eddy knows that he does “not belong to those who shrink back and are destroyed, but to those who have faith and are saved” (Hebrews 10:39, NIV). Four months after Eddy joined Micah, he and his friends produced a music video. (You can watch it HERE; it’s hilarious.) Eddy, the smallest kid with the spiked hair, wears a Micah shirt that is five times too big. Over and over, he sings: “No me descontrolo, porque no camino solo, which means, “I’m never out of control, because I never walk alone.”

Because the Micah Project exists, our boys never walk alone. Even in these uncertain times, they grow stronger because God’s love surrounds them through the Micah Family. Every member of our staff and each of our missionaries continually inundate them with love, wisdom, hope, and words of perseverance. Watching young men like Eddy turn around and pour these very things into the lives of others is a source of extraordinary joy.

You are a part of Micah’s amazing family that walks alongside our boys.  Your love, prayers, and financial support have helped them realize that they never walk alone as they leave brokenness behind and become men who will be agents of God’s love here in Honduras as well as around the world. Thank you for your continued presence in their lives!